Anyone who has been reading my blog for a while knows that I'm passionate about API testing.  I'm also passionate about using Postman for API testing, because in my opinion it's the easiest way to test API requests.  So it makes me sad when I see people testing an API and only asserting that they got a 200 response!  In this week's post, I'm going to take a simple GET request and show examples of 16 assertions that could be run on the request. 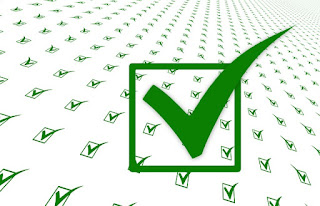 For the GET request, I'll be using the wonderful Restful-Booker application created by Mark Winteringham to teach people how to do API testing.  The request URL I'll be using is https://restful-booker.herokuapp.com/booking/1 which will retrieve the booking with the ID of 1. If you run this GET request in Postman, you'll get a response like this: 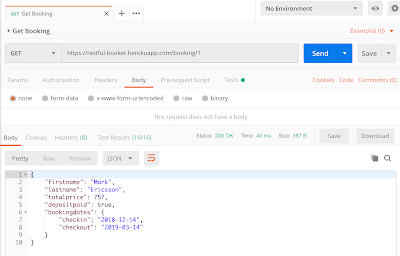 The response has the first and last name of a hotel guest, the total price of their room, whether or not their deposit has been paid, and what their checkin and checkout dates are.

You may see different details in the response from those in the above image, because this is a site that is under frequent use as people practice making API requests to change booking information.

Let's look at all the different assertions we can do on this response. To add these assertions yourself, click on the "Tests" tab just underneath the request URL.

1. First, we can add the most common assertion: asserting that the response code is correct.

The pm.test refers to "Postman test". "Status code is 200" is the name of our assertion. And pm.response.to.have.status(200) is what we are expecting from the response.

2. We can also assert that the response comes back within a reasonable time frame, like this:

This asserts that the response time is less than one second.

3-8. Next we can assert that expected headers are present:

These assertions are looking for the presence of a particular header rather than checking that the header has a specific value. The specific assertions above might not be particularly necessary, but sometimes it's a good idea to assert that certain headers are in place, such as X-XSS-Protection (not in this API), which indicates that there are measures in place to protect from cross-site scripting.

9-10.  We can also have assertions that validate that a specific header value is being returned:

11.  We can assert that certain text is included in the body of the response:

In this assertion, I am validating that the text in the body of the response contains "lastname".

12-13.  I can also assert that specific json fields exist in the response.  To do this, I first need to parse out the json in the response and save it to a variable:

Then I can assert on specific fields in the jsonData variable.  Here I am checking to make sure that the response has both a checkin field and a checkout field:

14-15. I can also assert that specific values are returned in the response:

In this first assertion, I am validating that the value of the first name returned in the response is "Mark". In the second assertion, I'm validating that "depositpaid" is true. Keep in mind that these values may actually change because others are using this API. When you add specific value assertions, you'll want to be sure that your test data does not change; otherwise your tests will be flaky!

16. Finally, I can assert that a value is greater or less than a certain number:

In this case, I am asserting that the total price paid is greater than 100.

The types of assertions that you run on your API responses will vary depending on what is important for you to test. While you may not decide that all types are appropriate for your API, I hope that these examples show that there are many more things to assert on than simply "200 OK"!

As I mentioned in a previous post , it's my goal this year to read and review one tech-related book each month.  This month, I read The ...