Last week, we explained what Cross-Site Scripting (XSS) is and demonstrated a couple of examples.  But knowing what it is isn't enough- we need to able to verify that our application is not vulnerable to XSS attacks!  Today we'll discuss three different strategies to test for XSS.

This is the strategy to use when you don't have access to an application's code, and when you want to manually try XSS.  To implement this strategy, you'll need to think about the places where you could inject a script into an application:

You'll also need to think about what attacks you will try.  You may want to use an existing list, such as this one:  https://www.owasp.org/index.php/XSS_Filter_Evasion_Cheat_Sheet

This cheat sheet includes lots of different ways to get scripts past any validation filters, including:

If you are testing manually, a systematic approach is best.  Locate all of the places where you could inject a script, choose a list of attacks you'd like to try, and try each attack in each place.  While you are testing, you may also gain some insight of how you could change the attack by what kind of response you get from the attack.  For example, if your script tag is stripped out by validation, you could try to encode it.

Strategy Two:  Look at the Code

This is the strategy to use if you want to test manually, and you have access to your application's code.  By looking at the code, you can determine the best way to craft an attack script.  This also works well for testing file uploads; for example, if your application's code lists file types that are not allowed, you may find some types that have not explicitly been blacklisted, and you can see if you can upload a script using one of those types.

Let's take a look at how you can use an application's code to craft an attack.  We'll be using the XSS Game again; we'll be doing Challenge 3, and in order to access it you need to have solved Challenges 1 and 2; so take a look at last week's post to see how to do that. 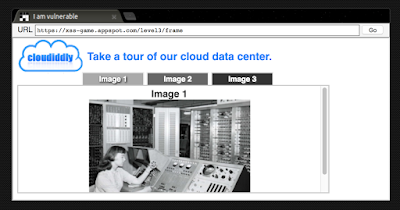 Our task now is to see how we can inject a script using this "num" variable.  Recall that in last week's post, we did some Cross-Site Scripting where we made it look like we were uploading an image, and we included an alert that would display when there was an error uploading the image. And we set things up so that there would always be an error, because we weren't really uploading an image at all.  We are going to do the same thing here.

Let's craft our URL.  We will begin with
https://xss-game.appspot.com/level3/frame
because this is how the URL always starts.

Next, we'll add
https://xss-game.appspot.com/level3/frame#3
because we want to make it look like we are following the pattern of choosing an image number.

Now we'll add
https://xss-game.appspot.com/level3/frame#3 '
because we want to trick the code into thinking that the image URL is completed. This means that the code will try to load an image called "cloud3" instead of "cloud3.jpg", which will generate an error.

Now we can add our on-error script:
https://xss-game.appspot.com/level3/frame#3 ' onerror='alert("Hacked!")'
When the alert is triggered, a popup window will appear with the "Hacked!" message.

Let's try it!  Take the entire URL:
https://xss-game.appspot.com/level3/frame#3 ' onerror='alert("Hacked!")'
Paste it into the URL window, and click the "Go" button.
You should see the popup window appear, and you have solved the challenge!

As you can see from the example above, crafting an XSS attack takes a little time.  You may have many places in your application that you need to test for XSS, and not much time to test them.  This is where automated tools come in!  With an automated tool, you can send hundreds of XSS attacks in less than a minute.  In next week's blog post, we'll take a look at how to use an oddly-named tool called Burp Suite to automate XSS attacks!